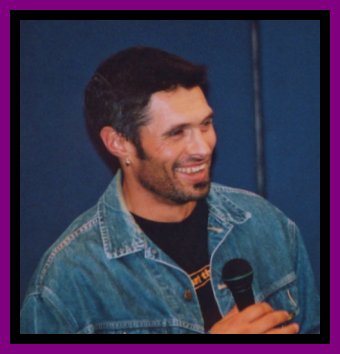 
March 2002
The most shocking news for XENA fans since the show ended was the tragic death of Kevin Smith in February 2002. Kevin was in China filming the movie "Warriors of Virtue 2" and after filmed had finished, he had an accident on the set, falling from a considerable height and sustaining severe head injuries that eventually proved fatal. A man of many many talents, Kevin had a fantastic voice, could play guitar, was adept at comedy, drama or action and was all set for his first Hollywood break. Kevin leaves a wife and three young sons. I was lucky enough to meet him a few years back, and any fans who met him will agree that Kevin was so NOT like Ares! Such a nice guy, not at all intimidating, a really down to earth Kiwi, although even more gorgeous in the flesh! A terrible waste.

Kevin Smith started out with the ambition to be a rugby player but injuries made him think about something else. After auditioning to play Elvis in the musical `Are You Lonesome Tonight`, Kevin was bitten by the acting bug.

Kevin first appeared in HERCULES as Iphicles, Hercules` brother who was going around pretending to be Herc. Soon after he was cast as Ares, also Hercules` brother! However, it was on XENA that he appeared the most. First seen in The Reckoning, Ares reappears to tempt Xena again and again, and is one of the top recurring characters.

The Bitter Suite was quite an eye opener for fans as Kevin revealed a wonderful rich singing voice that quite stole the episode. A new short haircut for series 5 has once more pushed Kevin Smith forward as THE sexiest man in the Xenaverse!

Kevin has appeared in a number of other film and TV roles and is a major star in his native New Zealand. He appeared in NZ detective drama "Lawless" as John Lawless - no escape from the name! Kevin recently appeared in "The Blue Room" on the stage in Auckland with fellow XENA star Danielle Cormack. 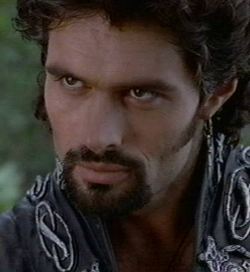 Ares interest in Xena was first seen in The Reckoning. Since then, he has again and again tried to tempt her to return to her old ways of death and destruction. He has often tried to trick Xena, such as in Ties That Bind, when he impersonated her father to try and stir her up. In Intimate Stranger, he assisted Callisto in her escape from Tartarus, while in Ten Little Warlords, he lost his powers when someone stole his sword.

In S3`s The Furies, Ares had Xena condemned to persecution and madness for not avenging her father`s killing. Xena mangaged to make the Furies believe Ares was in fact her father, although it is not clear whether she really believed this.

While always a bad guy, Ares has been nice in episodes like The Quill is Mightier, where he once again lost his powers. However, in S5 he has shown his ruthless side once more, although his fatal attraction to Xena seems undiminished.

Ares frequently risks the wrath of Zeus and the other gods, such as when he allied himself with Hope and Dahok, however he always seems to keep going but never manages to get Xena.

Season 6 saw Ares without his godly powers, and the mortal ex-God of War was a very different man. However, he still hasn't given up on winning Xena. Ares had his powers restored in You Are There, and makes his final appearance in Soul Possession.

Read an interview with Kevin from XENA magazine #11

Back to Cast and Crew page
Back to Main Xena page